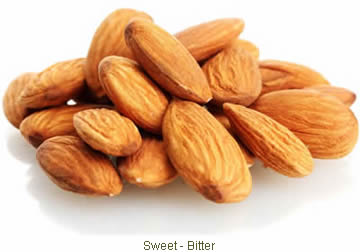 The almond counts as a rose plant and originates from the region around Iran, Afghanistan and Pakistan. In the 17th century travelling Franciscan monks took the almond to  the United States,, which are considered the main cultivation area of almonds today.

Harvesting is done by machine in late August to mid-October. Almonds are classified in sweet, soft-shelled and bitter almonds. Sweet and soft-shelled almonds have a sweet-tasting seed in common, whereas the bitter almonds, due to their glycoside amygdalin containing, have a typical bitter taste;if unprocessed, they are already in small quantities toxic.

The harvested almonds are dried first before the shells are separated from the kernels in rolling mills. In a next step, the kernels are purged of foreign objects such as resin, shell fragments and stones before they undergo sorting.

Almonds are used in the bakery and confectionery industry, or as snacks. Bitter almonds can also be used as producers of bitter almond oil, or,  in addition to sweet almonds, be further processed into marzipan.

The oval almond tree drupes have a higher content of calcium, magnesium and potassium than nuts.