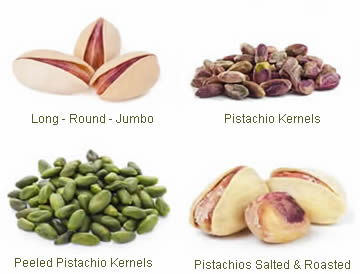 Originally regarded as the "king fruit " in Persia, pistachios have been specifically cultivated in this region since ancient times. As a delicacy from the Middle East, Pistachios rapidly widespread throughout the Mediterranean trading route to Europe. To date Iran, in particular the region around the cities of Kerman and Rafsanjan, ranks as the world's largest growing region.

Harvesting regularly occurs mid to late September, either by hand or by machine. Aflatoxin, a metabolic product of molds that forms in connection with dirt and moisture over a period of time, represents the main harvest risk. In order to counteract the Aflatoxin-progress, the course of harvesting requires special care as well as the direct further processing of the harvest.

Further processing of the harvested pistachio fruit involves as a fist step the separation of the pulp and as a second step the sorting of the goods by open or closed as well as size-wise.

Pistachios are considered as nutrient suppliers of polyunsaturated fats, fiber, vitamin B and cytoprotective polyphenols.